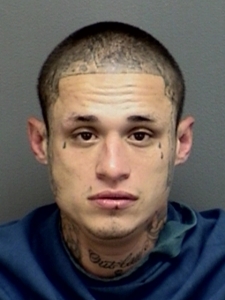 Last night Officers with the Wichita Falls Police Department received information that 31 year old Raymondo Acuna was at a residence in the 700 block of Taylor.  Acuna was known to have an active parole violation warrant.

At approximately 10:30 pm  Officers observed a white Hyundai Sonata leave the residence.  Officers attempted to stop the vehicle for a traffic violation at which time the driver of the vehicle began to accelerate and attempt to evade Officers.  After a short pursuit the vehicle left the roadway in the 1000 block of E. Wenonah and jumped a curb.  The driver, along with the passenger, jumped out of the moving vehicle and began to flee on foot.  The vehicle continued until it struck a house in the 1000 block of E. Wenonah.  Minor damage was caused to the structure and no injuries were reported.

Both the driver and the passenger of the vehicle were apprehended and identified as Raymondo Acuna (driver), and 20 year old Felicia Lytle.

When Officers searched the vehicle they located a shotgun.

Great turn out at Coffee with a Cop this morning at Collective Coffee!
Join us tomorrow morning!!!
On 11-04-21, WFPD officers pulled over a Chevrolet Silverado pickup for a traffic offense in the 2100 blk of Broad St. The driver was identified as 48 year old Jonathan Glover.
On 11-03-21, officers were dispatched to 1313 E. Central Freeway in reference to a disturbance/assault. Upon arrival, the victim reported that 33 year old Trenton Warren had assaulted her during an argument, stole her keys, and took her vehicle without consent. The vehicle and Warren were both located a little further down Central Freeway where the vehicle ran out of gas.
On 11-02-21, officers were dispatched to URHCS in reference to a disturbance involving 48 year old Keneshala Brown. Brown was on scene damaging hospital equipment and threatening hospital staff. Once officers were on scene, Brown began threatening and spitting on them. Brown was arrested and charged with the following:
Are you between the ages of 21-44 looking for a new, exciting career? If so, come and join our team!
Loading Comments...
%d bloggers like this: