On 11-16-20, officers attempted to stop a vehicle for a traffic offense in the 1600 blk of 22nd. The vehicle tried to flee but crashed between a house and a tree. Two of the three occupants fled on foot and the third was detained on scene. One of the subjects that ran was later captured and arrested. He was identified as 32 year old Cruz Guzman.

Investigation revealed that the car contained 493.6 grams of methamphetamine, 31.71 grams of black tar heroin, and a handgun.

Guzman was arrested and charged with:

The investigation is ongoing. Charges are still currently pending on a second subject and a third subject is still at large. 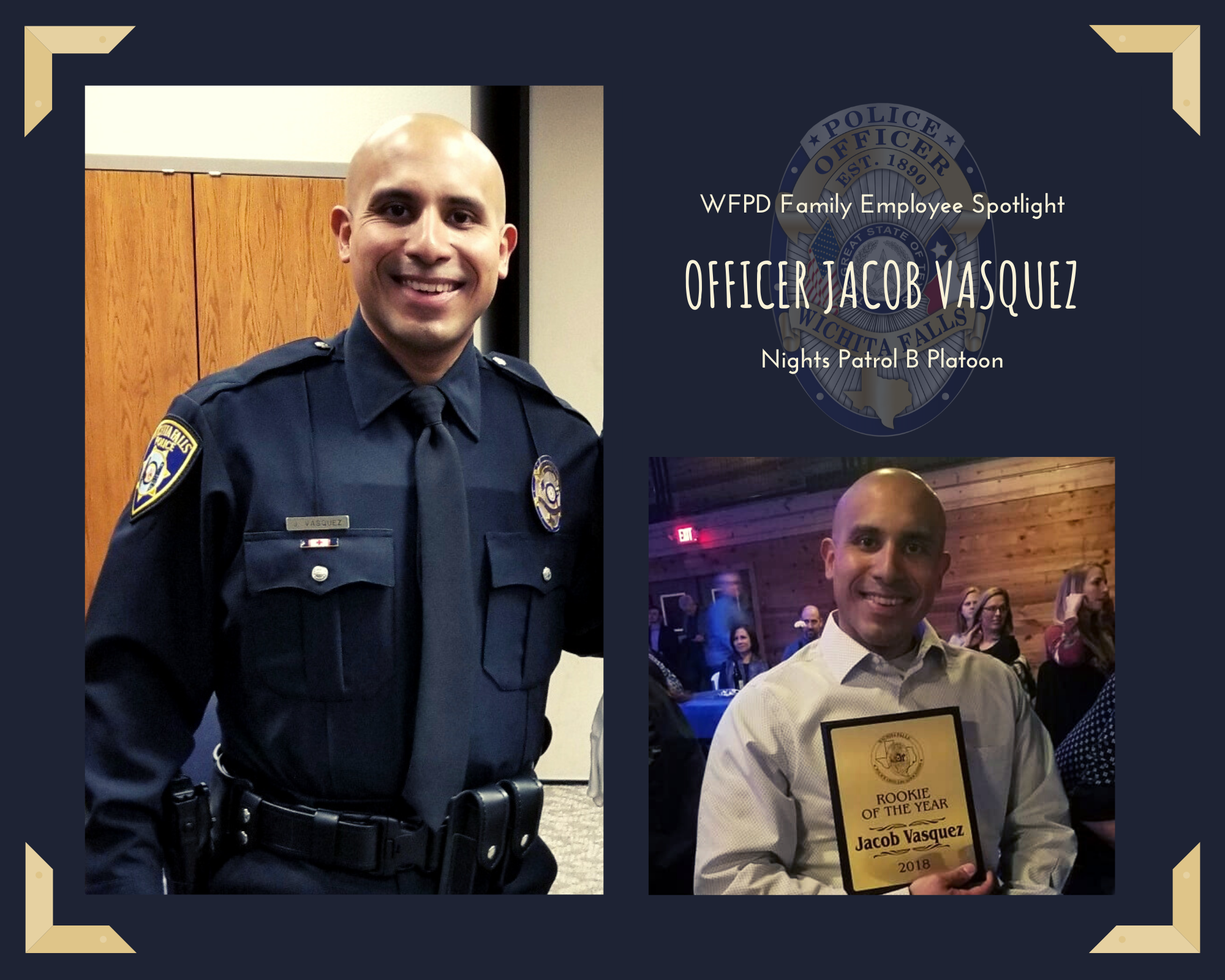 Officer Jacob Vasquez graduated from the 70th Wichita Falls Police Academy in August 2017 and is currently assigned to the Nights B Patrol Platoon.

He graduated from Old High and completed his Bachelor of Science in Criminal Justice from Midwestern State University in 2010.

In 2018, Officer Vasquez was named “Rookie of the Year” by the Wichita Falls Police Officers Association. He was also awarded a Life Saving Bar by the department in March 2020.

In his free time, he likes to travel, eat pizza, and watch his beloved Dallas Cowboys. His favorite part of the job is helping to solve crimes through good police work.

Thank you Officer Vasquez for your dedication to the department and the citizens of Wichita Falls – YOU ARE A TRUE HERO!

On Saturday, November 30th, at approximately 12:00 am officers with the Wichita Falls Police Department were dispatched to the 1500 block of 14th St in reference to an occupied vehicle check. It had been reported that there was a subject in a black Ford Mustang honking his horn and waving a gun around.

When officers arrived they observed a subject, who was later identified as 19 year old Daniel Le, exiting out the driver’s door of a black Ford Mustang.   In plain view they observed a firearm in the backseat of the vehicle.

Officers searched the vehicle and located a green leafy substance in a large, clear cellophane wrapping under where the firearm had been located. The substance was field tested and rendered a positive for marijuana.  It weighed 9.9 ounces.  Further search of the vehicle revealed $2,500 in cash along with a digital scale and plastic baggies.

Le was arrested and transported to the Wichita County jail where he was charged with unlawful carrying of a weapon and possession of marijuana.

On Thursday October 10th at approximately 8:20 pm officers with the Wichita Falls Police Department conducted a traffic stop on a black Hyundai Santa Fe near 31st and Holliday.  The driver was identified as 54 year old Brian Terry and the passenger was identified as 49 year old Angela Pendley.

Terry gave consent for officers to search the vehicle at which time they located in the center console a marijuana cigarette and a small plastic bag that contained a white crystal like substance that showed positive for methamphetamine when field tested. It weighed 0.9 grams.

Terry stated the marijuana was his but neither her or Pendley claimed ownership of the methamphetamine.  Both suspects were arrested and transported to the Wichita County jail.  While at jail Pendley was searched and was found to be concealing a plastic bag that contained 7.19 grams of a crystal like substance on her person.  The substance was field tested and rendered a positive for methamphetamine. 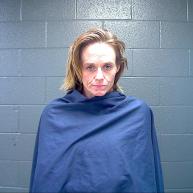 Early this morning at approximately 12:30 am officers with the Wichita Falls Police Department observed a tan 2006 Chevrolet Silverado with expired registration in the area of Kell and Taft.  Officers attempted to initiate a traffic stop at which time the driver refused to stop.

As the vehicle was near Harrison and Kell officers observed a clear plastic bag being thrown from the vehicle.  Officers were eventually able to get the vehicle stopped in the area of Brook and Kell.  Officers identified the driver as 38 year old Kristin Martin and the two other occupants as 29 year old Amanda Carroll and 31 year old Andrew Carroll.

Officers went back to retrieve the bag that was thrown from the vehicle and found it to contain a substance that showed positive for methamphetamine when field tested.  The weight of the substance was 14.88 grams.

All three suspects were arrested and transported to the Wichita County jail where they were charged with possession of a substance in penalty group one and tampering with evidence.  Martin was also charged with evading. 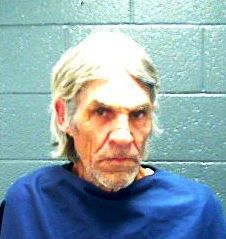 On Monday March 4th at approximately 8:15 pm officers with the Wichita Falls Police Department were dispatched to the 1800 block of 9th Street to King’s Food in reference to a possible aggravated robbery.

Upon arrival officers spoke with the victim who stated that as he was exiting the store when he was approached by a white male who was later identified as 60 year old Billy Payne.  The victim stated that Payne asked for money.  The victim told Payne that he had none to give him and continued to walk away.  Payne followed the victim to the victim’s vehicle at which time Payne displayed a knife and began to wave it around while continuing to approach the victim.  The victim then got into his vehicle, locked the doors and called police. 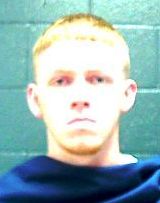 On Sunday, February 17th at approximately 11:35 pm Officers with the Wichita Falls Police Department were dispatched to the 1700 block of Grandview W. in reference to a disturbance involving a handgun.

Upon arrival officers spoke with the reporting party who stated that 21 year old Justin Harmon and 20 year old Jesse Olvera had called him from his sister’s phone and advised him that he had 30 minutes to be in Iowa Park or they would kill his sister. The reporting party stated he owed Harmon $500.

Officers contacted the Iowa Park Police Department and made them aware of the situation.  Officers with the Iowa Park PD made contact with Harmon, Olvera, and the victim on Magnolia St in Iowa Park. Officers spoke with the victim and she stated multiple times that she was in fear for her life and that Harmon and Olvera had forced her to drive to Iowa Park.

Both Harmon and Olvera were taken into custody and transported to the Wichita County jail where they were charged with aggravated kidnapping.

On Monday, December 3rd, at approximately 10:45 pm officers with the Wichita Falls Police Department observed a white 2010 Chevrolet Camaro driving at a high rate of speed in the 1000 block of Central Freeway. Officers stopped the vehicle and identified the driver and sole occupant as 36 year old Joshua Copa.

Officers conducted a search of the vehicle and located a total of three firearms, 23 grams of THC oil and 46 pounds of marijuana.

On Saturday, September 8th, at approximately 11:15 pm officers with the Wichita Falls Police Department responded to a report of a large fight outside of the Deep End Bar located in the 5100 block of Jacksboro Hwy.

While officers were standing outside of the vehicle they could smell the odor of marijuana coming from inside the vehicle.  When they looked inside the car through the open windows they could see very small pieces of a green substance that appeared to be marijuana.  The green substance was strewn throughout the car, on the occupants clothing, on bags in the car, on the center console and on the sides of the doors.  Several of the subjects were also covered in mud and admitted to being part of the disturbance that had occurred in the parking lot.

During the course of the investigation officers recovered 0.11 ounces of a substance that rendered a positive for marijuana using a field test kit.  Officers also located a loaded handgun under the passenger side of the vehicle.  When officers reviewed the video from the in-car camera they could see what appeared to be the front seat passenger, Greer, open his car door, stick his foot out the door and then reach his hand under the vehicle.

All subjects were arrested and transported to the Wichita County jail without incident where they were charged with possession of marijuana.  Greer was also charged with unlawful carrying of a weapon. 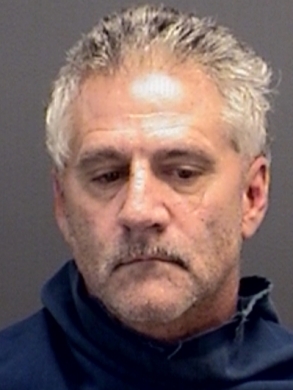 On Wednesday, July 18th, at approximately 10:20 pm officers with the Wichita Falls Police Department stopped a black 2012 Jeep Wrangler in the area of 30th St and Grace St for a traffic violation.  When officers approached the vehicle they saw that it was occupied by a white female driver and a white male passenger, who was later identified as 56 year old Larry Teague.

The driver gave officers consent to search the vehicle. During the search officers located inside the glove compartment a bag that contained a scale with a white residue on it along with several small, clear plastic bags.  Officers then searched the occupants of the vehicle and located on Teague in his front right pocket three clear plastic bags that contained a crystal like substance that when field tested showed a positive for methamphetamine. Teague was placed under arrest and the driver was released.

While in route to the Wichita County jail Teague advised officers that he had more narcotics on him.  Officers located in his underwear another bag with a crystal like substance.  The total weight of narcotics located on Teague was 43.11 grams.  Teague was also found to be in possession of an Alprazolam pill.

WFPD officers responded on 10-14-2021 at about 4:30 pm to the residence at 6715 Geronimo to investigate a possible suicide.
Our hearts are completely broken after two Texas officers lose their lives this weekend in the line of duty.
Wichita Falls Crime Stoppers Texoma’s Most Wanted for January 21
This week, officers from across the area came together at the WFPD Firing Range for a Shooting Reconstruction course sponsored by Nortex. A huge shout out to Mike’s Towing and Binswanger Glass for supplying the class materials.
he WFPD has received information in the past few weeks of more thefts and attempted thefts of catalytic converters in the Wichita Falls area. The incidents are occurring predominately in parking lots of businesses, schools, and other agencies.
Join us today as we remember and honor Dr. Martin Luther King.
Loading Comments...